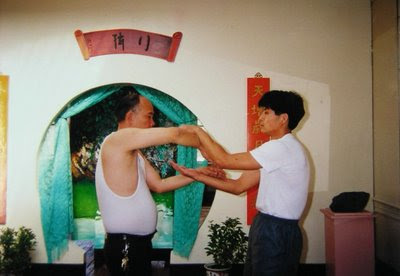 In this special edition we Will bring a historycal interview by Si Gung Leo Imamura (10 G VT) to a very old brazilian fight magazine called “IMPACT”. But…Why historical?
Cause its is from the very very early `90s! Vanilla Ice and MC Hammer were in the Top of billboard and you were pumping up the jam with technotronic when he gave this interview! So enjoy!

Also, a very special thanks to Luciano Freitas(12G VT), To Dai of Master Julio Camacho(11G VT) and a KF brother of mine, and of course the biggest Bruce Lee fan in Sao Joao de Meriti City who founded this preciosity for us! 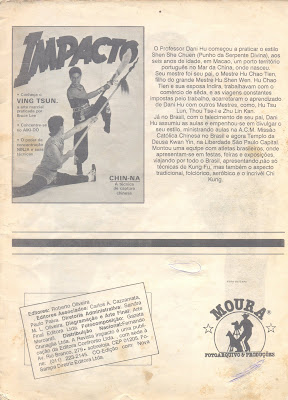 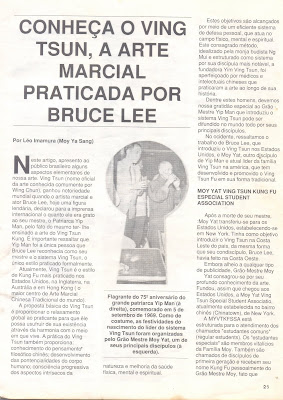 (Under the picture is written: "photo from the 75th anniversary of late grand master Ip Man with Moy Yat with in his side in November,5 of `69. Moy Yat as always was the promoter of the celebration and wasone of his top disciples.)


Meet the Ving Tsun, the martial art practiced by Bruce Lee.
(IMPACT MAGAZINE published in Brazil in very early `90s)
Article by Master Leo Imamura in the beginning of his carrer


In this article, I present to brazilian people some elementary aspects of our art. Ving Tsun (official name, but also called as Wing Chun), earn a lot of publicity when the martial artist and actor Bruce Lee, today a legendary icon, said to the international midia that he was very grateful to his Master Ip Man for teach him Ving Tsun.
Its important to say that Ip Man was the only person that Bruce Lee recognized as his Master and the Ving Tsun System as his only formal practice.
Nowadays, Ving Tsun is the Kung Fu style must practiced in US, UK, Australia and also in Hong Kong (the biggest Chinese martial arts center in the world).
The basic proposition of Ving Tsun is to make the practitioner feel relaxed and be able to enjoy his existence in harmony with the place that he lives.
The practice of Ving Tsun also gives: development of the body potentials, a very understanding of the classic Chinese way, and conscience of the intrinsic aspects of the nature. And also a better health: physic, spiritual and mental.
Those objectives are reached using a efficient system of self-defense who acts in physical,mental and spiritual fields.

This legendary method released by a budist monk called Ng Mui and structured by her most proeminent disciple called Yim Ving Tsun was improved by intellectuals and medics who practiced the art trough the generations.

Between those men we must be grateful to Grand-Master Ip Man who introduced the system in Hong Kong, and now the art can be spread around the world by his disciples. In west we notice the work by Bruce Lee introducing the Ving Tsun in US and Moy Yat, another disciple of Ip Man and the leader of the Ving Tsun Family in US who has developed and promoted the Ving Tsun in its traditional form.


After the death of his Master, Moy Yat moved to US in NY.
He has the objective to promote Ving Tsun in East Coast of US as his kf brother did , Bruce Lee in the West Coast.
He don’t like publicty but Grand-Master Moy Yat is considered by many a great Master cause of his deep understanding of Ving Tsun.

He started in the same moment that in arrived in US the MYVTKFSSA that now is in Chinatown in NY. A MYVTKFSSA is structured to attend regular students and also special students(also called disciples). The special students are members for life(lifetime member) in the Moy Family.

They are also called disciples of first generation of Moy Yat and receive their kung fu name by his own hands, a fact that is a 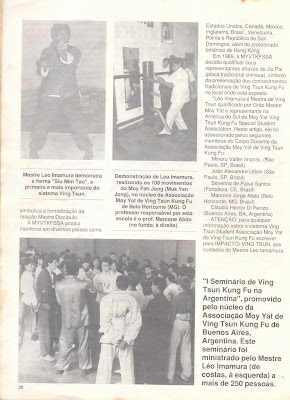 (the first pivture in the left is Master Leo Imamura doing Siu Nim Tau. In the top in the right side is again Master Leo Imamura showing 108 Muk Yan Jong. The biggest picture is about the I SEMINAR OF VING TSUN IN ARGENTINA with over than 250 people.

...symbol of the Master-Disciple relashionship.The MYVTKFSSA is in many countries like: US, Canada, Mexico,UK, Brasil,Venezuela,Polonia , San Domingo Republic and also Hong Kong. In 1989 the MYVTKFSSA decided to give a Jiu Pai for its representants as a symbol of the preservation of the traditions of the Ving Tsun. Leo Imamura is a Qualified Master by Moy Yat and a representant of him and the MYVTKFSSA in South America. 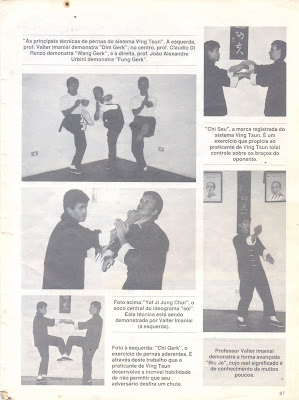 In this page, the instructors showed "Kicks", "Chi Sau" , "Biu Ji","Punch",Chi Geuk". The jornalist only wrote what they are doing. 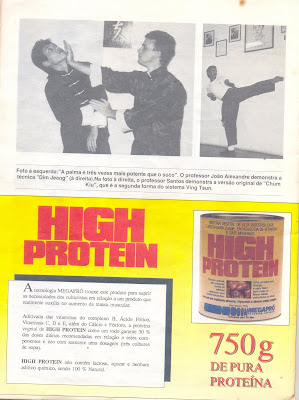 Obrigado pela visita!
Thanks for coming!