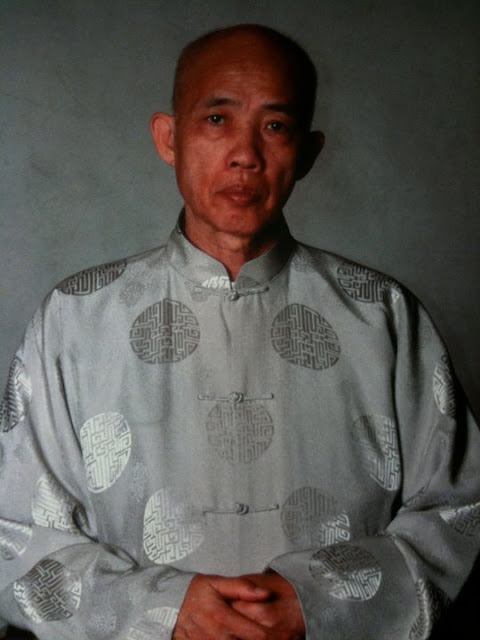 Las sunday was completed 10 years of the passing of Si Taai Gung Moy Yat. One of the greatests personalities, not just in the art that became him more famous, the Ving Tsun, but also, in several arts of classical chinese culture.


Uma história de calças acima do umbigo:
A story about trousers above navels. 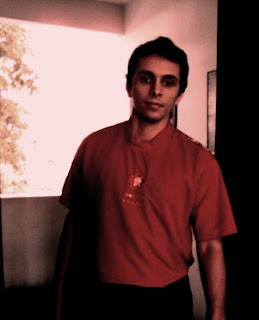 Outro dia Si Fu estava justamente falando comigo sobre o fato de que cada discípulo de um mesmo Si fu, é diferente um do outro,no sentido do que cada um deles "pegou de seu Mestre" como característica.
Si Fu comentou que ainda que não use as mesmas roupas que Si Gung, ele reparou certa vez que estava usando a calça de treino "muito em cima" como seu Si fu faz.
Rindo, comentei que me sentia até estranho quando botava a blusa pra fora, e principalmente com a calça de treino, inconscientemente eu também fazia isso de colocá-la muito em cima.rsrs
Someday ago, Si Fu Julio Camacho(11G VT) was just talking to me about the fact that every disciple of the same Si Fu is different from one another in the sense of what each one of them "got from their Master" as a characteristic.
Si Fu said that even that does not use the same clothes as Si Gung Leo Imamura(10G VT), once he noticed he was wearing the training trousers "very top "(above the navel)  as his Si Fu does.
Laughing, I said that I felt even stranger when my trainning t-shirt would put out, and especially with the workout trousers, I also did it unconsciously put it very up.lol 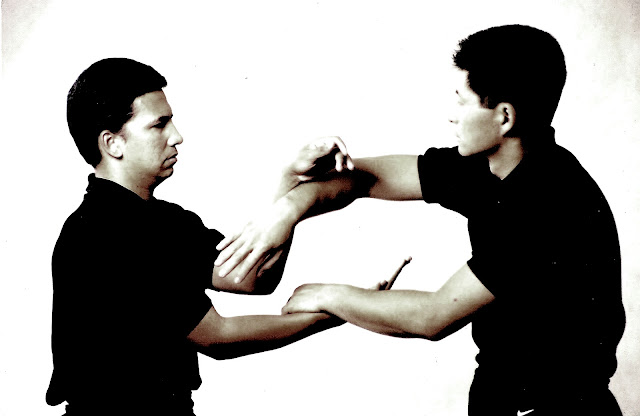 Maybe you're thinking, "Why" to talk about it when the date is now on another story. But I can give you some reasons: Si Taai Gung Moy Yat himself said that we are making history all the time, moreover, I see my Si Fu in small details about me, as he sees the Si gung in small details about him. Although it is just about "trousers above the navel. " 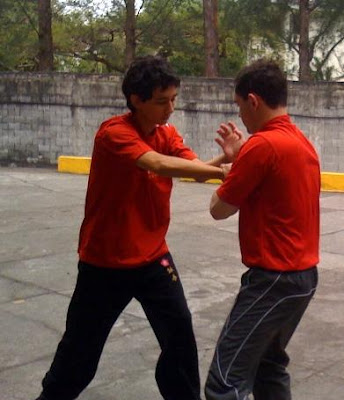 So the blog entry brings a magazine from the 90's where Si Gung Leo, much younger in his career, he speaks of his mentor, Grand Master Moy Yat: 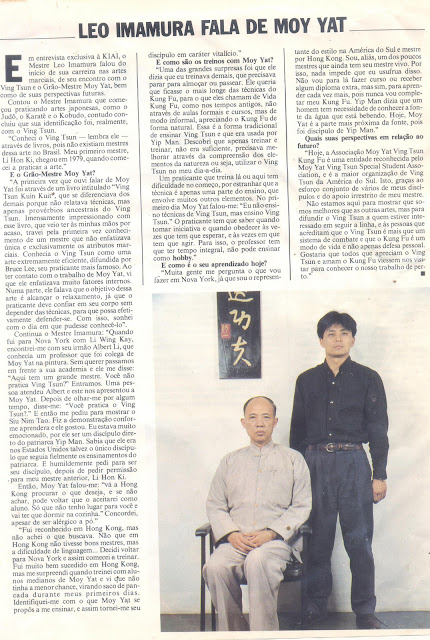 LEO IMAMURA TALKS ABOUT MOY YAT.
In a exclusive for KIAI MAGAZINE,Master Leo Imamura spoke about the beginning of his carrer in martial arts, also about his first meeting with Ving Tsun and Grand-Master Moy Yat,about his plans for future as well.
Master Imamura said that started with japanese martial arts, like Judo, Karate and Kobudo, but he realized that his indentification was with Ving Tsun.: "I first knew about Ving Tsun trough books 'cause the weren´t many masters of this art in Brazil.My frist Master was Li Hon Ki, who came to Brazil in 1979, when I started to practice Ving Tsun" - said him.
KIAI: And about grand-MAster Moy Yat?
"The first time that I heard about him was trough a book called Ving Tsun Kuen Kuit, that was different from anothers, 'cause that was not about techniques,but just about sayings from the Ving Tsun ancestors.
So, very impressed with the book, that was in my hand just by chance,I was in front for the first time the knowledge of a Master that was not just emphasizing the martial aspect of the Art.
'Cause I knew Ving Tsun at the time, as a very efficient art , spread by Bruce Lee, its most famous practitioner. As I have the first contact with Moy Yat's work, I saw that he used to emphasize internal factors.
In one side, he used to say that the objective of this art was reach the relaxation, 'cause the practitioner must be confident in his body without know the techniques for a effective self-defense. With this I dreamed about the day that I could meet him in person."
So, when I went to NY with Ling Wing Kay , I met his brother Albert Li, who knew a teacher who was a fella of Moy Yat in painting. Without planning, we pass along Moy Yat´s school. And Abert said: 'In this place there is a great Master. Dont you practice Ving Tsun?'So we stepped in. Someone received Albert, and this person introduced us to Moy Yat. After look me for while he said: Do you practice the Ving Tsun? -so he asked me to do the Siu Nim Tau. I did the SNT as I learned and he liked that. I was very touched 'cause he was a disciple from Ip ManI knew that in US he might be the only disciple who was following strictly the principles of Ip Man. And asked him to become his disciple, after asked my Si Fu Li Hon Ki permission to do that.
So, Moy Yat told me: 'Go to Hong Kong search for what you were looking for. If you dont find it, you are able to come back and become my student. But I dont have any place for you here, so you will have to sleep in kitchen' - I agree with that even being alergic to dust.
"I was recognized in HK , but did not find what I was looking for. It is not that in HK there ano no good teachers, but  de difficulty about language ...So I decided to go back to NY so I started to train. I was very successfull in HK but I was surprised 'cause at Moy Yat´s school , standarts students make me realized that I had no chance, becoming a basketball in their hand for the first 5 days.
I was very touched by Moy Yat who wanted to teach me, so I became his disciple for life."

KIAI: And how is the trainnings with Moy Yat?

"One of the greatests surprises was that he said that I used to train too much. He said that I need sometime to walk, have lunch,etc. He wanted me to stay as far as possible from the techniques to something that he called Kung Fu Life.As in old times, no trough formal classes and seminars, but trough some informal way, aprecciating the Kung Fu in a natural way.


This is the traditional way to teach Ving Tsun and the way that was used by Ip Man. I find out that just train and train, was not sufficient enough, I need to get better trough the compreension of the nature elements, I mean, to use the Ving Tsun in my daily life.


A practitioner who trains there or here has difficulty in his beggining, 'cause he thinks very strange  the techinique just as a part of the trainning, wich englobes much more than that. At the first day, Moy Yat told me: " I dont teach Ving Tsun techniques, but I teach Ving Tsun". The practitioner must know when get the initiative and when obey , sometimes he will have to wait, sometimes he will have to act. But for that, the teacher has to have a lot of time for him. The teacher can not teaches as a hobby."


KIAI: And how is your lessons today?

"A lot of people what I´m gonna do in NY , if I´m already a representant of the style in South America and Master by Hong Kong. I am, one of the few Masters who has his own master still alive. Because of that I enjoy him.
I´m not going there to learn in seminars or get some new certificate, but I´m going there to learn more, and more, 'cause my Kung Fu will never be completed. Ip Man used to say that a man has the necessity to learn the orign of the water that he is drinking. Today, Moy Yat is the nearest part of the orign, 'cause he was Ip Man´s disciple."

KIAI: What are your plans for the future?

"Today, the Moy Yat Ving Tsun Kung Fu Association is a institute recognized by MYVTSSA , and it is the bigger organization of Ving Tsun in South America. That is just possible trough the effort of many disciples of mine and the support of my Master.
We are not here to show that we are best than the others. But to spread Ving Tsun for who is interested  in follow this line, and for the people who believes that Ving Tsun is more than a fight system, and the Kung Fu is a way of life and not just self-defense.
I would like to invite anyone who loves Ving Tsun and Kung Fu to visit us."