I want to apologize for the lack of periodicity on the BLOG, but is that suddenly my life is "swallowing me"(as we say in Brazil) .. hehe What is not good! Just to give you an idea, I wonder why my life did not enter into a kind of "Clone Saga"?. , I like all the characters from Marvel, and at one time or another, everyone of  them had an arc of stories arise where clones or something shows up . with the amount of stuff I have to do lately, not even a version of me "evil" with my goatee would not be all bad, as long as he could help me ...

But as in the real world such a thinhgs does not happen , until I organize everything, the blog can not stand still, So I´ll always bring reviews(magazines or newspaper) with great content about Ving Tsun, So I do not need to write a lot!

Read this excellent article with my Si Fu, where once again the theme refers to how we look at the martial arts, especially the Ving Tsun, without stereotypes.
Hope you enjoy! 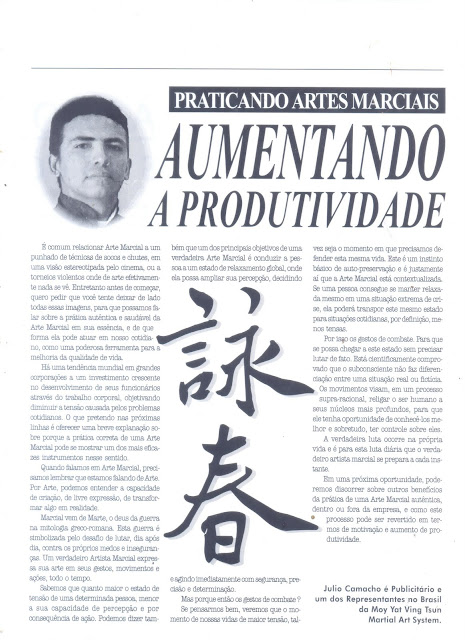 
Is very common associate martial arts with a lot of techniques about kicks and punches, in a stereotyped vision based on movies or based on violent tournaments , where you can not see nothing about "art". But before I start, I´d like to ask you to let aside all those images from your mind, so we can talk about the truly and healthly practice of the Martial Arts in all its essence. And how it can act in our daily life becoming a very important tool for a better quality of life.

There is a worldwide tendence in great corporations to invest in its employees corporal development,trying to decrease the tension from the daily problems.

What I´ll try to explain on the next lines, is why the martial arts when practiced correctly may prove itself as one of the most effective tools in this regard.

When we talk about MArtial Arts, we must remember why we are talkin' about "Art".

When talk about "Art" we can understand as a capacity to create, free expression, or transform something in a real thing.

Martial comes from "Mars"(Marte), the God of War in the Greco-Roman Mithology.This war is sibolyzed by the challenge to fight, day after day, against our own fears and insecurities

A true martial artist, expresses his arts all the time trough his gestures ,movements and actions.

We know that as bigger is the tension of someone,smaller is his perception ability and also action.

We can also say that one of the goals of the martial arts is to take the person to a full relaxed state ,where he can increase his perception deciding and acting faster with self-confidence,precision and determination.

So, why fight gestures?

If we think a little bit more, we will see that the higher tension moment in our lives maybe is when we have to defend this same life. It is a basic instintic of self-preservation, and this is where the martial arts is contextualized. If someone can stay relaxed during a extreme crises situation, this person can put this same feeling in his daily life , by definition, less tensioned.

Thats the reason for the Fight Gestures.
To be able to get in this level without fight. It is proved that our mind do not see difference between the real and the imagination. The fight movements has the goal to take the human being deeper inside himself , this way he can know himself better and can control himself better.
The real fight happens everytime in life, and is for this fight that the martial artist prepare himself everyday.
Another time we can also discuss some other benefits from martial arts inside and outisde companies and how this proccess can be changed in increase of productivity.
Master Julio Camacho (11G VT) is graduated in Publicity (adman) and is the Representant of
MOY YAT VING TSUN in Rio de Janeiro State.
MOY YAT VING TSUN NÚCLEO RIO DE JANEIRO
(BARRA/MÉIER/IPANEMA)
(21)31505148
Thiago Pereira,12G VT
moyfatlei.myvt@Gmail.com
Postado por A Journey of Ving Tsun Life às 00:29:00