Last november 11, my Si Gung Leo Imamura, gave an interview to the Commerce NEwspaper from Sao Paulo State ,talking about the book where he and his wife,My Si Taai Vanise Imamura, written the preface.

We are talkin' about the "36 secret strategies" by Hiroshi Moriya. To read the portuguese interview ON Line click HERE. For read the print edition , read below the translation: 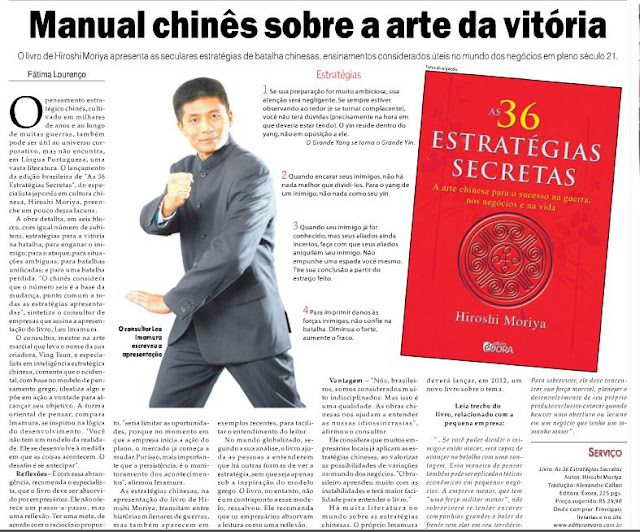 Chinese manual on the art of victory

Hiroshi Moriya's book presents the secular Chinese battle strategies, teachings found useful in the business world in the 21st century.
The Chinese strategic way of thinking, cultivated in thousands of years and through many wars, can also be useful to the corporate world, but  in Portuguese language has not a vast literature.
The Brazilian edition of the book "The 36 secret strategies" by the Japanese expert in Chinese culture, Hiroshi Moriya, fills this gap a little.
The book details six blocks, with an equal number of sub-items, strategies for victory in battle, enganjar the enemy to attack, to ambiguous situations, battles for a unified and losing battle.
"The Chinese consider that the number six is the basis for change, the common point to all the strategies presented." Summarizes the business consultant who signs the presentation of the book, Leo Imamura.
The consultant, a master in a martial art that takes its name from its creator, Ving Tsun, and Chinese strategic intelligence expert, said that the Western model based on Greek way of thinking. Idealizes something and put into action to achieve  their goal. The Eastern way of thinking, compares Imamura, was inspired by the logic of development. "You have a model of reality. It develops as the things happens.Thechallenge is to anticipate."

Reflections - It is with this breadth, the expert recommends that the book should be absorbed by businessman. He do not offers a step-by-step, but a reflection. Having a goal, according to the reasoning proposed, would limit the opportunity, because at the time the company starts the action plan, the market is beginning to change. Therefore, more important than persistence, is the monitoring of events, said Imamura.
The Chinese strategy in the presentation of the book Hiroshi Moriya, move from ancient stories of war but also appear in recent instances, to facilitate understanding of the reader.
In the globalized world, according to his analysis, the book helps people understand that there are other ways to see the strategy, without being just under the inspiration of the Greek model. The book, however, there is not a counterpoint to this model, cautioned. He recommends that business absorb reading as a reflection.

Advantage - "We Brazilians are considered too unruly. But this is a quality. The Chinese works help us understand our idiosyncrasies," says the consultant. He believes that many local businesses have already implemented strategies based in Chinese way of thinking, to enhance the possibilities of variations in the business world. "Brazilians learned much from the instabilities and will find it easier to understand the book.
There is much literature on the strategies in the Chinese world. Imamura himself should launch in 2012, a new book on the subject.

Read an excerpt from the book, related to small business: "... If you can divide the enemy and then attack, will be able to come up with an advantage in battle. This way of thinking can also be applied to economic tactics in small business . the smaller company, which has "a force smaller," will not survive if you try to look at large companies and butt heads with them in their territory. to survive, it must concentrate its strength martial plan for developing your own unique product and attack when there is an opening or gap in a business that has a larger size. "